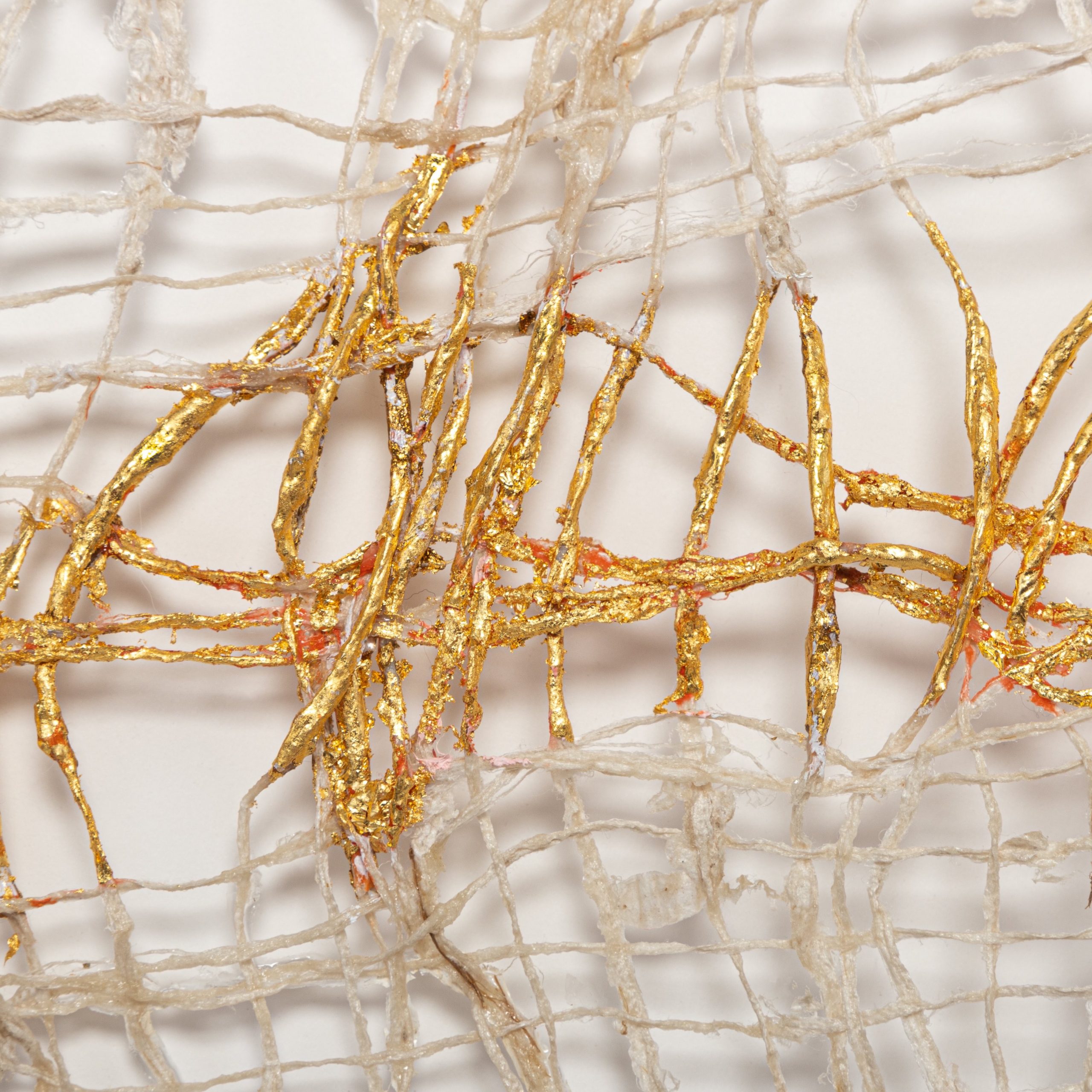 Kiyomi Iwata’s fiber-based practice explores raw material as a source for intricate compositions which merge contemporary textile forms with traditional Japanese aesthetics. Between the 1970s and early 2010s, her semi-sculptural and fully three-dimensional works were created with fine silk organza threads and flexible metal meshes, often containing visual and thematic references to traditional Japanese craft and fine art. In recent years, Iwata has shifted to using kibiso as her primary medium. This unusual material is produced from the first several meters of silk produced by silkworms. Rough and uneven in texture, the material is historically regarded as refuse. Weaving the kibiso into loose gridded patterns and often incorporating gold embellishments, custom dyeing techniques and painted elements, Iwata illuminates the beauty and delicate nature of an otherwise “waste” product.

Born in Kobe, Japan in 1941, Kiyomi Iwata emigrated to the United States in 1961. She has studied at the Virginia Museum of Fine Arts Studio School, the Penland School of Crafts in North Carolina, the Hystack Mountain School of Crafts in Maine, and the New School for Social Research in New York, NY. Iwata has been featured in numerous solo and group exhibitions at venues in the United States and abroad, including the American Craft Museum in New York, NY; the Renwick Gallery at the Smithsonian Institute in Washington, D.C.; and the Tilburg Textile Museum in Holland. Her work is included in the collections of the Metropolitan Museum of Art  and the Museum of Arts & Design in New York, NY, the DeYoung Museum in San Francisco, CA, the Cleveland Museum of Art in Ohio, and the Virginia Museum of Fine Arts in Richmond. She is the recipient of several awards and honors, including the National Endowment for the Arts Fellowship in 1986. In 2009, Japanese Prime Minister Yukio Hatoyama presented President Barack Obama with one of Iwata’s wall hangings during a state visit to Japan. Iwata currently lives and works in Richmond, Virginia.