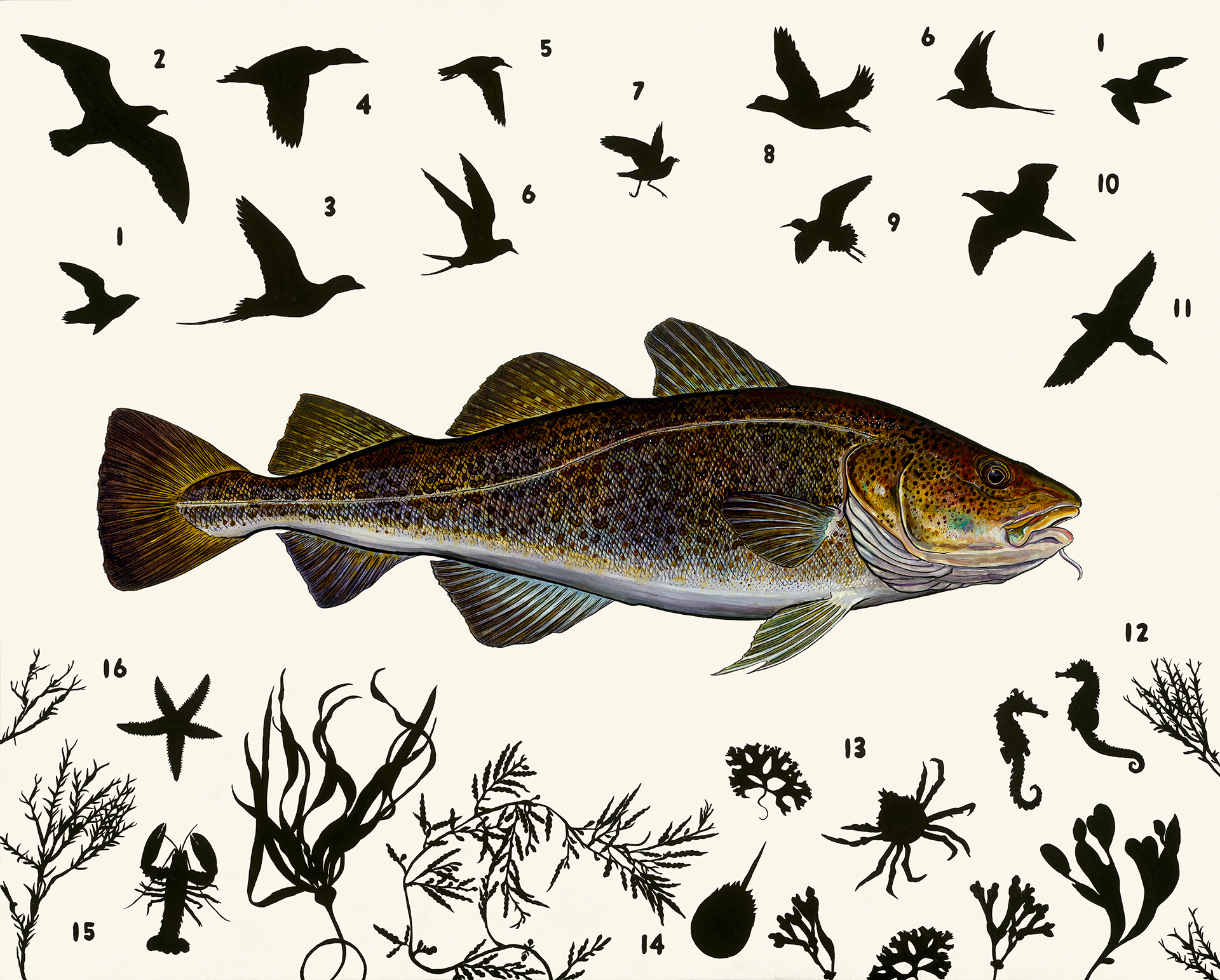 James Prosek’s paintings teem with life, presenting a diverse collection of vertebrates and deep-water dwellers. Employing biological documentation as the framework for his paintings, he untangles the web of species’ classification, forming a catalogue-like body of work. An avid traveler and researcher, his inspiration stems directly from life observation of subjects and their habitats, which span from Nova Scotia across the Atlantic and into coastal Africa. His direct observations imbed an instinctual, organic quality within the work as he wields a paintbrush, palette, and keen eye. He builds up slight strokes to precisely render animals, which radiate with crimson freckles or emerald streaks, illuminating the creamy, tea-stained paper. As if animating a textbook, an Atlantic cod fish gleams with wetness, appearing slippery on the page, while a tanager’s feathers extend beyond the frame, seemingly caught in a breeze.

The Connecticut native graduated from Yale University in 1997 and currently lives and works in Easton, CT. He has exhibited in Abuja, Nigeria and Ghana, Africa, both of which hosted Art in Embassy shows; The Virginia Museum of Fine Arts, Richmond, VA; Smithsonian American Art Museum, National Academy of Sciences, both, Washington, DC; Philadelphia Museum of Art, and Tanya Bonakdar Gallery, New York, NY. His work is held in major private and public collections, including the Museum of Fine Arts, Houston, TX; The National Museum of Wildlife Art, Jackson, Wyoming; Try-me, Richmond, VA; Whitney Museum of American Art, New York, NY; Smithsonian American Art Museum, Washington, DC; and the North Carolina Museum of Art, among others. Beyond his artistic career, Prosek is a well-noted author and conservationist. He has written for the New York Times and National Geographic Magazine, and has published eleven books, many of which received national recognition. In 2003 he received a Peabody Award for his documentary on the life of author and naturalist Izaak Walton. Prosek co-founded World Trout, a cold-water conservation organization paired with Patagonia which fundraises by selling trout-painted t-shirts. In 2012 he was awarded the Gold Medal for Distinction in Natural History Art (Academy of Natural Sciences, Philadelphia).