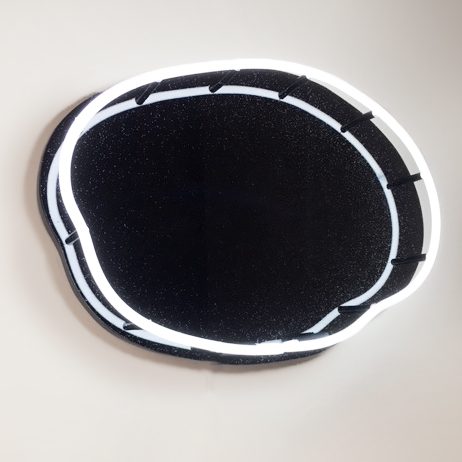 Esther Ruiz’s playful palette and distinct pairing of materials stems from Minimalist influences reinvented. Using cement, MDF, neon, geodes, and paint, her creations unapologetically coexist; her symmetrical placement communicates a believability, a naturalism, in the object’s origins. Much like a sci-fi movie set, we wonder where these objects came from and how they came about, all the while entrancing and mystical and grounded in the nearby buzz of electrical outlets.

Based in Brooklyn, New York, Ruiz was born in Houston, Texas and received a BFA in Studio Art from Rhodes College in Memphis, Tennessee (2011). She is the recipient of the 2016 Artist Grant and Williamsburg Studio Lottery from SpaceWorks and the 2014 ArtBridge Urban Modulations Public Art Installation and Award.  She has shown nationally and internationally at galleries including yours mine & ours gallery, New Release Gallery, Regina Rex, Field Projects, Planthouse Gallery, all, New York City; Urban Glass, Brooklyn Academy of Music, Brooklyn; Cross MacKenzie Gallery, Washington, D.C.; Platform Baltimore; Vox Populi, Philadelphia; and the American Center for Physics, College Park, MD. Her work has been reviewed in publications including The Washington Post, Art News, VICE, The Wall Street Journal, The American Ceramic Society, Hyperallergic, The New York Times, and on National Public Radio (NPR).